At home I have a need to measure temperature and control various circuits in response to those temperature changes and other inputs. The sensor network needed to span at least 100m and ideally should have the ability to reach out to 200m (so I could get down to the Chicken Coop and pool). Looking around the internet it appeared the RS485 standard would do this.

I found on AliExpress the store RobotDyn which appeared to good reviews all round and I couldn’t find a bad word about their boards anywhere.

So I ordered from them several Arduino Uno boards plus sensors and relay boards – took about 4 weeks to turn up. Note: In Australia a genuine Arduino Uno board costs around $15 each plus delivery, the same thing from this supplier was around $4 delivery inc. Yes, it takes 4 weeks to turn up, but I wasn’t in any great hurry. BTW the RS485 interface boards cost around $1.5 AUD each – nice.

So once I had the boards I set up a test rig to get a proof of concept off the ground, the set up was as follows:

My design was based on several resources I found:

Basically what I did was put the RS485 Master on the EtherTen, and RS485 Slave on the Uno, then I ‘split’ the DHT11 example down the middle using a C struct to form the message to send back containing the temperature measurements. 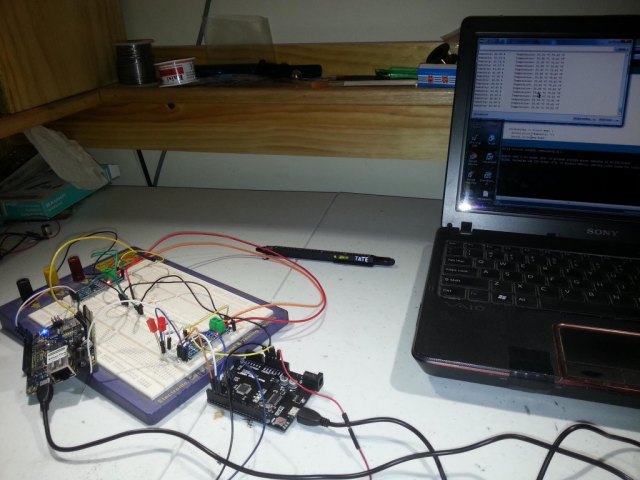 You can see the prototype running in the above picture. The top left window shows the temperature output as read via RS485. You can just see the Red LED’s on the RS485 boards showing they are powered.

BTW: If you are wondering what the black tape on the laptop is doing, this Viao has a rather annoying WiFi on/off toggle right on the front, which with age has become rather unreliable – hence the tape to ensure it always remains on.

I want to get this running off a separate power to the laptop and make it possible to query the EtherTen via its Ethernet connection. A few things I need to resolve first: