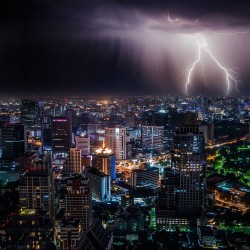 Although lightning is a common occurred in Australia, not much thought is given to the consequences of it; that is until you suffer a lightning strike..

About 4 weeks ago we had a very severe storm cell that hung around Sydney, in particular it was producing quite a loud lightning show not that far away.. In fact it turned out that the lightning decided to pay a visit a little bit too close for comfort. About 4pm in the afternoon we heard an almighty bang outside, followed by a ‘bang’ inside. The bang outside was a tree being struck which under the force peeled back like a banana and split in two. The bang inside was our home automation system dying…

What we reckon happened was this:

Now the wire concerned was buried and not ‘active’ to the home automation system (i.e. it just looped through a pair of relays) – but the air gap on the PCB concerned was not enough and spark jumped to the supply rail on the relay PCB and literally then fried everything in the box… The story at the gate controller end was no better, as the PCB got fried and then the induced current through the transformer went and blew the fuse on the mains side.

I also found out that the network line running down to the office had a similar induced current in it, which fried a network switch – quite incredible given it was on the other side of the building away from the lightning strike.

The net result of this was about $1000 worth of damage in replaced electronics and general inconvenience. Although I did manage to learn a lot about how to better deal with a lightning strike and protect your wiring.

(Now just take this as general advice, you should really get in touch with a qualified electrician to set you up if you don’t have an electronics background)

First off, you won’t be able to protect your electronics from a direct lightning strike – the energy involved is just far too great to deal with and your better to focus on ways of avoiding it being struck in the first place. By this I mean:

By doing this the chances of a direct strike goes down dramatically. Although you still need to deal with the induced current and voltage that can come into your wiring via the following means:

You see when lightning strikes it causes a massive localized magnetic field to come into existence for a short period of time. Changes in magnetic field (either by moving through one, or one being created) induces current and voltage in anything conductive in range… This with lightning can easily be in the thousands of voltages and many tens of amps for a very short period of time – unfortunately its long enough to fry anything unprotected on either end.

So how do you protect equipment against this nasty little shock?

There are components on the market (called Gas Discharge Surge Arresters and MOV’s) that normally have a very high resistance (M range), but once the voltage across then goes above a certain threshold – their resistance drops pretty much to zero and quickly. So with such components wired across the signal wires (and Earth) coming into your system, you give the excess voltage a route to Earth that does not go via the equipment behind it – so protecting it.

The trick here is to use Arresters or MOV’s whose breakdown voltage is higher than the normal voltages encountered on the signal lines and ensure they are wired to a good Earth. It’s also worth remembering that the MOV’s are slightly quicker than the Gas Arresters but are not as capable of dealing with the higher currents, so a circuit like the one shown here  and here would allow you to get the best of both worlds.

Remember the goal is present to the excess current and voltage an easier way to get to ground (Earth) than going through your equipment – so do make sure that the wire leading to ground is thick and well terminated – you want the resistance on that wire to be pretty much zero.

Cost of Protecting against strikes

Oddly enough the cost incurred compared to the cost of the damage done is around 5% tops. Each MOV costs around 50c and each Gas Discharge Arrester is in the order of $5 to $10, both from JayCar. So far I have put in protection either end on the run to the gate and have on order some RJ45 network surge protectors (from AliExpress) for the grand sum of $7 each.